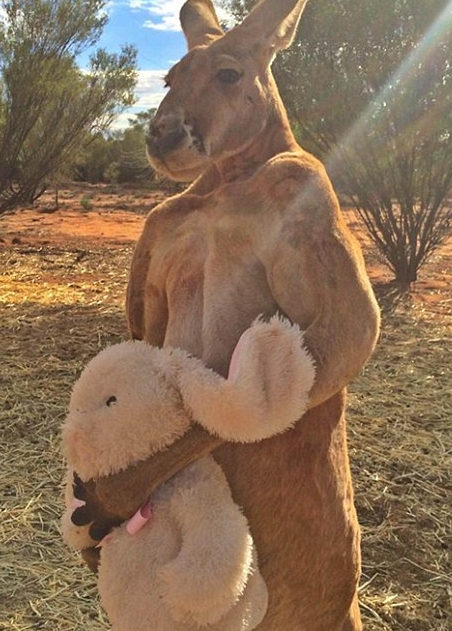 Check out Roger the kangaroo.  He's pretty fucking awesome (and apparently hella ripped - holy Jeebus.)  He hangs out at a sanctuary in Australia with his bestest buddy, a soft plush bunny he likes to hold in his buff ass arms.  Cue the Awwwwws.

Roger is an alpha male (aren't they all? Ugh...) who was given the bunny as a random gift from a visitor...the story warrants its questionable merit/legs because the manager of the sanctuary is a filthy rat who wants everyone to know that...

NOW ROGER WILL NOT LET THE BUNNY GO.

Mr. Barnes, the aforementioned cheese eating manager, says > "When I gave it to him he snatched it off me really quickly and proceeded to attack it, giving it a "bear hug" and wrestling it, even hugging it and kicking out as he would do in kick boxing match, he's an expert kick boxer."

Whenever Barnes tries to take the bunny back Roger gets all kickboxy on him and attacks him whilst keeping his bunny safe.  Barnes says they go through this shit on the daily.

What the hell is even the problem though?  Just let the dude have his bunny, man!  Why you gotta be all up in his grill about it?  It's his damn bunny...

See, I get worked up because, thing is - Roger has had a rough life...

But poor Roger was rescued in 2006 after his mother was found dead on a highway.  Barnes says that "baby kangaroos are often found still alive in the pouches of dead kangaroos out on the roadside," which is like the saddest thing I have ever heard.  Baby kangaroo orphans...

Barnes also says that "Roger is often very protective of the female members of his group," and that "he will attack anyone or anything that gets too close to him or his women."

Sounds pretty pimp to me...Just let him have the stupid bunny.

Image Via www.the dailymail.co.uk
Posted by bungledandthebotched@yahoo.com at 4/14/2015