Whatever Happened to Jody Claman of The Real Housewives of Vancouver? 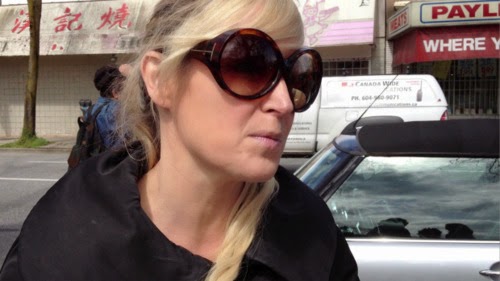 For two seasons of The Real Housewives of Vancouver, Jody Claman wreaked havoc on the ladies of the affluent west coast city, degrading most of them in any given ep and even suing a few.

Well!  Cut to 2012 and the show was cancelled (such a bummer) leaving most of the ladies to go back to their pretty awesome lives.

Her West end shop, The Glass House Boutique (the one she owns with her daughter Mia) was vandalized by an animal rights group for being a large distributor of (possibly used) fur products and isn't open regularly anymore, her daughter Mia was shot in the shoulder while hanging out with her alleged gang banger BF (they actually sued poor Mary Zilba AGAIN when she spoke about the shooting), her catering company shut down for quite a few years, Mia got knocked up by said alleged gang banger and her husband divorced her leaving her with absolutely no money and court costs up the arse.

Here's the skinny on the divorce >

When grilled by her ex-hubby's attorney in court last fall Jody lamented that she is broke as fuck saying she was "$148,000 in debt and has expenses of $50,000 a month."

She claims to need the $50k a month to cover the mortgages on three homes citing that she wasn't able to borrow against the properties and she has shitty credit.  Jody is apparently against selling anything to cover the costs of being Jody but her ex (Eran Friedlander) ain't buying it.

Without a pre-nup (dumbass) her ex has the right to half of everything but she claims her monthly expenses include $400 for transportation (bitch claims to take the bus yeah right), $300 for clothes and $1200 for charitable donations to a shelter so she can't afford to pay/give him any dough.

Sell some of those tiaras, woman!

Also embarrassing for the thrice married matriarch of Clamanville was a psych assessment that was completed for the trial where she was found to be "aggressive" and "narcissistic."

Duh.  Who needs the assessment?  Watch the show!

The Judge (Miriam Gropper) "dismissed [Jody's] evidence outright and accused her of manipulating her daughter [that cute lil' towhead, Hannah] and the court-appointed psychologist and of trying to manipulate the court."  She also said Jody would do "anything to get what she wanted with no regard for the truth."

No love from the judge...

Claman was to pony up $600k to her ex by January of this year.  I couldn't find any further info online regarding if she paid him or not and the jerk blocked me from twitter because I tweeted with Mary about the weather a couple of times (oy vey) but the last posted reference on The Province suggests she was appealing the case.

I'm not into kicking people when they're down and Mia has always been cool with me on twitter but Jody is a merciless insult assassin who takes HUGE pleasure in not only trashing people publicly but also screwing with their lives.  Honestly, I think some people deserve to be kicked.

Maybe she'll be nicer now that she's been dealt the shitty hand she tried so hard to deal to other people.  Either way...

Email ThisBlogThis!Share to TwitterShare to FacebookShare to Pinterest
Tags: Real Housewives, Whatever Happened To?