Sinead O'Connor is the Ugliest Bride I have Ever Seen 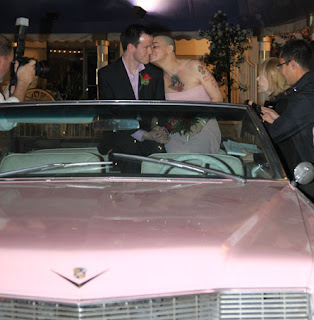 For realz!  That headline is pretty bitchy but day-um woman!  You are one fugly broad!  The Cadillac is kind of boss though (apart from the color), I'll give her that...

In a random wedding on her 45th birthday, Sinead O'Connor got married at The Little Wedding Chapel in Vegas (aka where Brit Brit got hitched to that dude who had the same name as George from Seinfeld for a whopping 55 hours.)  Suck on that, Kim Kartrashian!

O'Connor married an Irish therapist (too easy) named Barry (doesn't matter) in a god awful pink dress and that aforementioned boss Caddy.  On her website she wrote of the wedding:

"Dear friends... amongst whom I include whomever may be reading this with a view to writing about the glorious marriage.
Am blogging this cus media people are naturally seeking me.
On sunday I will put up blog on whole day. Too glorious for words.
For now though, as you will appreciate, it's a bit of a 'Can't. Talk. Cock. In. Mouth'. Situation."

And I kind of thought that Sinead was gay.  Was she gay before?  Am I allowed to ask that or is that not PC?  I suppose she wouldn't want a cock in her mouth if she were gay.

Anyways, gay or straight, girlfriend is one hot damn mess!

Email ThisBlogThis!Share to TwitterShare to FacebookShare to Pinterest
Tags: Weddings