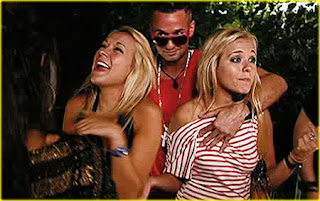 Ugh!  Really Hollywood?  Is this where we're at?  Making reality shows about the hobags who bed hopped on the Jersey Shore?  Hashtag FAIL!

You guys remember these two slores Brittany and Erica Taltos from a few eps back?  You know, the ones who tried to tongue-bang Other Snooki, possibly sucked off the Situation and probably slept with Vinny?  How could you forget, right?  Well, some dumbass production company has inked a deal with the two for a show called Twinning (duh).  They posted on their FB page:

They say that, "...twinning is not what the 'Jersey Shore' depicted it as. Twinning is dressing the same, being on the same page, doing the same things together – nothing perverted. It's just being."

They claim to have a 3.5 GPA at the University of FLA and vow that they're "...not going to end as the 'whores' who starred on 'Jersey Shore.'"  Ha!  Kind of using the term "starred" pretty fast and loose, slutbags ladies!  There's a ton of chicks who have banged those juicy guidos!  All they ended up with was some embarrassing footage that their kids will see and possibly an STD.

So yeah, good luck with ALL that!

Email ThisBlogThis!Share to TwitterShare to FacebookShare to Pinterest
Tags: Jersey Shore, The Situation